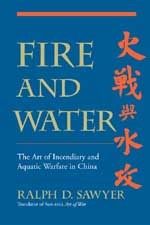 Fire and Water: The Art of Incendiary and Aquatic Warfare in China

Fire and water, each terrifying and uncontrollable once unleashed, were the only means available for inflicting massive destruction before the discovery of gunpowder and the perfection of tubed weapons. Even massed archery volleys simply multiplied the effect of single arrows, whereas fire continued to spread and intensify while water eroded and inundated. Although frequently chosen by the outnumbered and disadvantaged, they nevertheless provided astute commanders with critical combat multipliers, tools for shaping the battlefield, and methods for implementing the unorthodox.

Defensive techniques quickly developed in response to their application even as the theory of incendiary warfare, commencing with Sun-tzu’s famous chapter on the subject, evolved and ever more ingenious practices were implemented in concord with the escalating scope of warfare. Water was exploited early on for defensive purposes;flooding was employed just before the Warring States; and the "water ram" saw first application in the struggle to establish the Han, but methods to poison or deny water supplies date back far earlier.

Although incendiary techniques were dramatically employed in riverine warfare from the Three Kingdoms period onward, the discovery of gunpowder further enhanced and multiplied the number of devices. Incendiary attacks rapidly grew in extent and intensity, producing devastation rarely witnessed in earlier periods. Fire and Water examines the evolution and practice of these two aggressive methods from both the theoretical and historical standpoints, provides translations of the key writings from Sun-tzu onward, and reprises numerous battles in which they were employed to dramatic effect. Technological developments are concurrently examined, including gunpowder’s discovery and dedicated early employment as a deliberate incendiary in the Sung, including in such crucial battles as Ch’ih Pi and P’o-yang Lake.