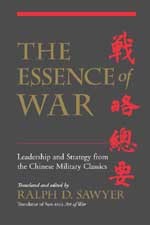 The Essence of War

Although the Chinese military corpus encompasses dozens of major works and numerous minor ones, easily surpassing the equivalent of 100,000 English language pages, the Seven Military Classics not only provided the foundation but also continued to exert a disproportionate influence right through the Ming despite major changes in battlefield equipment and practices over the centuries. The Essence of War introduces the crucial views, concepts, and tactical principles from these seven founding works by arraying them in forty-one topical chapters under five thematic sections: Fundamentals, Tao of Warfare, Tao of Command, Tactical Essentials, and Tactical Specifics.

In conjunction with the One Hundred Unorthodox Strategies, The Essence of War thus provides a concise introduction to Chinese military materials that were historically important and continue to be the focus of contemporary study in both business and military circles in China and other Asian countries. (The core teachings have been augmented with selections from Sun Pin’s Military Methods that enhance and further explicate Sun-tzu’s original concepts and teachings.)