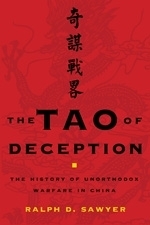 The Tao of Deception: Unorthodox Warfare in Historic and Modern China

First articulated by Sun-tzu in the Art of War, the concept of unorthodox warfare grounded Chinese theorizing on military activities for more than two millennia. Being defined against the orthodox and expected, the unorthodox can not be reduced to mere trickery or simplistic posturing, but rather constitutes the very essence of knowledge based, maneuver warfare. Unorthodox actions are designed to create and facilitate localized tactical imbalances, the requisite condition for exploiting overwhelming strategic power and thereby achieving a stunning, apparently easy victory.

Numerous pivotal historical battles in which desperate forces overcame immense odds by relying upon craft, cunning, and knowledge and thereby came to define the nature of unorthodox techniques are included. Collated in the military compendia, they invariably furnished a library of examples and methodology for later commanders.

"The Tao of Deception is a striking success and the first book to link ancient Chinese texts to current Chinese military planning. It has long been suspected that Chinese leaders today draw many specific lessons from their ancient classics. Ralph Sawyer, after a lifetime of translating classic Chinese military texts, has made a dramatic breakthrough to help us all understand the sources of potential Chinese calculations -- and miscalculations." Michael Pillsbury